DELFT, Netherlands, Oct. 23, 2019 /PRNewswire/ -- A company producing sustainable feed used in commercial fish farms has won a $200,000 prize in the "F3 Fish Oil Challenge", in which it's estimated over 2 billion fish were preserved. The competition was set up by global NGOs and researchers to accelerate the adoption of alternative feed ingredients that reduce the industry's reliance on wild-caught fish. 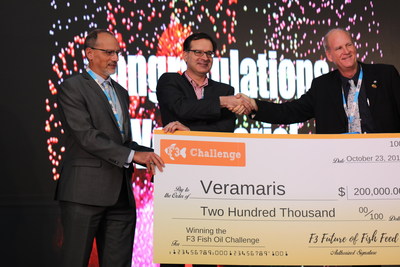 The volumes sold by Veramaris are equivalent to nearly 90% of the total 2 billion fish that were conserved during the challenge, according to estimates by the F3 Challenge organization: https://f3challenge.org/

Fish farming, which is also known as aquaculture, provides around half of the world's seafood and is growing fast to feed a growing population. The industry relies on wild-caught fish for feed, however, it is searching for high-quality alternatives to fish based feed ingredients as fish stocks are increasingly under pressure.

According to the UN's Food and Agriculture Organization (FAO), 90% of fish stocks are either overfished or fished to their limit. A further reduction in these fish stocks would have a detrimental impact on the world's marine ecosystems.

Supermarkets and food producers around the world are increasingly turning their attention to the use of sustainable aqua feed ingredients, with UK supermarket Tesco PLC recently updating its salmon standards in an effort to reduce the amount of wild-caught fish that is fed to salmon in aquaculture.

Veramaris was announced as the winner of the prize at the Global Aquaculture's Alliance conference in Chennai, India on 23 October 2019.

Karim Kurmaly is CEO of Veramaris, he said: "Developing a sustainable and commercially scalable fish free fish oil alternative has been the sharp focus of the company's vision from the outset."

? "I have to thank those courageous leaders along the entire value chain for their collaboration and for taking significant steps to ensure a continued sustainable future for aquaculture."

? "The forecasted rapid growth of seafood consumption and the current reliance on using wild-caught fish means that if this trend continues, we may jeopardize marine eco-systems, while not being able to provide healthy and nutritious seafood to a growing population. Farmed seafood, by far the most sustainable source of animal proteins, is critical for transitioning to sustainable and future-proof food systems".

­? "We look forward to the next phase in the commercialization and adoption of Veramaris' "fish-free" natural marine algal omega-3 oil by the world's fish and shrimp farmers to further reduce the industry's marine environmental impact."

Dr Kevin Fitzsimmons, Chair and Judge of the F3 Fish Oil Challenge and former President of the World Aquaculture Society, said: "We extend our congratulations to Veramaris for their innovative breakthrough fish-free EPA & DHA omega-3 and ARA oil replacement. The adoption of the product by farm owners is testament to the effectiveness of the feed, and we hope that the rest of the commercial fish farm markets follow suit in adopting a sustainable fish oil substitute."

Industry leaders such as the world's largest salmon farmer Mowi, as well as Yuehai Feed Group and AlphaFeed have committed to trial Veramaris' winning algal oil, rich in omega-3 EPA and DHA ? a testament to a strong commitment to sustainability.

The Veramaris volumes were predominantly produced at two pilot facilities in Slovakia and the US. On July 10th this year Veramaris opened its world-scale facility in Blair, Nebraska to keep up with increasing demand for omega-3 EPA and DHA. The capacity at the Blair site can cover 15% of the global salmon aquaculture's need for these essential fatty acids that up until now were only sourced from the oceans.

Veramaris, a joint venture between DSM and Evonik, excels at providing the aquaculture industry a high-quality source of EPA, DHA, and ARA, thereby removing a bottleneck for future growth and performance of the entire industry. A recent study by the Norwegian research institution Nofima proved that high levels of omega-3 EPA and DHA in salmon diets resulted in significantly improved fish survival, growth, coloration, and welfare.[1]

The Future of Fish Feed was launched in 2015 as a collaborative effort by NGOs, researchers, and private partnerships to accelerate the commercialization of aquaculture innovations to alleviate pressure on the oceans. The F3 Challenge is sponsored by The University of Arizona, University of Massachusetts Boston, Cuna del Mar, Synbiobeta, Anthropocene Institute, Dawson Family Fund, Sustainable Ocean Alliance, The Nature Conservancy, The Campbell Foundation, Tides Foundation, and The National Renderers Association.

Veramaris is a 50:50 joint venture between DSM and Evonik for the production of the omega-3 fatty acids EPA and DHA from natural marine algae. Located in Delft, the Netherlands, Veramaris was launched in 2018, because its parent companies shared a vision: to conserve marine life by using ocean's own resource ? natural marine microalgae. Producing an algal oil rich in the two essential omega-3 fatty acids EPA and DHA through large-scale fermentation at its facility in Blair, Nebraska, USA, Veramaris enables partners along the value chain to become independent of wild-caught fish and meet the growing demand for animal protein responsibly.

This information and any recommendations, technical or otherwise, are presented in good faith and believed to be correct as of the date prepared. Recipients of this information and recommendations must make their own determination as to its suitability for their purposes. VERAMARIS EXPRESSLY DISCLAIMS ANY REPRESENTATIONS AND WARRANTIES OF ANY KIND, WHETHER EXPRESS OR IMPLIED, AS TO THE ACCURACY, RELIABILITY, COMPLETENESS, NON-INFRINGEMENT, MERCHANTABILITY AND/OR FITNESS FOR A PARTICULAR PURPOSE (EVEN IF VERAMARIS IS AWARE OF SUCH PURPOSE) WITH RESPECT TO ANY INFORMATION AND RECOMMENDATIONS PROVIDED. IN NO EVENT SHALL VERAMARIS BE LIABLE FOR ANY DAMAGES ARISING FROM OR RELIANCE UPON, OR USE OF, ANY INFORMATION OR RECOMMENDATIONS PROVIDED HEREIN. Reference to any trade names used by other companies is neither a recommendation nor an endorsement of the corresponding product and does not imply that similar products could not be used. Veramaris reserves the right to make any changes to the information and/or recommendations at any time, without prior or subsequent notice.