CHARLOTTE, N.C., Oct. 22, 2019 /PRNewswire/ -- If you've ever felt so moved by your financial situation that you cried over it, you're far from alone. According to a recent survey by CompareCards.com, nearly 70% of Americans admit to becoming emotional over their finances. 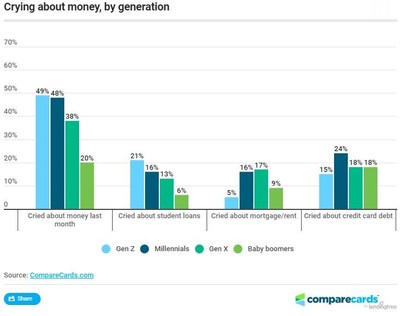 While some say they've been moved to tears by joyful events, such as a financial windfall or treasured gift, many more Americans say that financially stressful experiences, such as a lost job, mounting debt or a pinched budget, were responsible for their weeping.

Crying about money is common

Among those who have cried because of money, most say they were brought to tears fairly recently. For example:

Not every respondent cried because they were feeling upset, though. A number of respondents said they were moved to tears by happy events that made their lives richer or less financially stressful. For example:

Young people in their 20s and 30s are much more likely than older generations to become emotional over money, the survey found ?? perhaps because many are dealing with more acute financial stressors.

Members of both Generation Y and Generation Z, for example, are more than twice as likely as baby boomers to have recently cried about their finances. They are also more likely to say that student loans, personal loan debt, auto loans or credit card debt have, at times, brought them to tears. In addition, millennials are significantly more likely than their baby boomer parents to say they've cried over their mortgage or rent payments.

Many 20- and 30-somethings are also first-time parents and are raising kids on a limited budget, which may also be contributing to their stress. According to the CompareCards survey, for example, parents of minors are substantially more likely than other Americans to say they've recently cried over their finances.

At least 4 in 10 Americans agree with the statement, "Nothing makes me cry more than money."

Debt is by far the biggest stressor driving people to tears

The top stressors causing people to cry, for example, include:

Besides credit card debt and housing debt, a number of Americans say they're stressed out by:

Several other financial stressors have also pushed people to tears, such as:

Meanwhile, 7% said they had other reasons for feeling emotional. Another 5% said that none of the common stressors listed had ever brought them to tears.

To view the full report and for more information, visit https://www.comparecards.com/blog/americans-cried-about-money/.

About LendingTree
LendingTree (NASDAQ: TREE) is the nation's leading online marketplace that connects consumers with the choices they need to be confident in their financial decisions. LendingTree empowers consumers to shop for financial services the same way they would shop for airline tickets or hotel stays, comparing multiple offers from a nationwide network of over 500 partners in one simple search, and can choose the option that best fits their financial needs. Services include mortgage loans, mortgage refinances, auto loans, personal loans, business loans, student refinances, credit cards and more. Through the My LendingTree platform, consumers receive free credit scores, credit monitoring and recommendations to improve credit health. My LendingTree proactively compares consumers' credit accounts against offers on our network, and notifies consumers when there is an opportunity to save money. In short, LendingTree's purpose is to help simplify financial decisions for life's meaningful moments through choice, education and support. LendingTree, LLC is a subsidiary of LendingTree, Inc. For more information, go to www.lendingtree.com, dial 800-555-TREE, like our Facebook page and/or follow us on Twitter @LendingTree.

About CompareCards:
CompareCards' mission is to help people make smarter, more informed, healthier financial decisions based on deeper knowledge of financial offers. Each month, over 2.9 million visitors come to CompareCards' website to independently compare credit cards side-by-side and choose a credit card based on interest rate, reward benefit, cost savings, and other factors that are important to each person. CompareCards provides easy-to-use, objective tools and educational resources that help people do everything from making credit card comparisons to managing their credit health. For more information, please visit http://www.comparecards.com.