ORLANDO, Fla., Oct. 14, 2019 /PRNewswire/ -- Speaking with groups of delegates during the 2019 Florida Democratic State Convention, candidate Michael E. Arth deplored the degradation of the American democracy and related economic issues. According to the Democracy Index, the United States has slid from 21st to 25th place during the Trump presidency. "We are now ranked below Chile and Estonia," said Arth. "Instead of being number one in incarceration, we should be number one in democracy. We should also be number one in happiness, life expectancy, climate change performance, press freedom, and equality. As it is, we have a terrible record on all of these issues, especially on inequality." 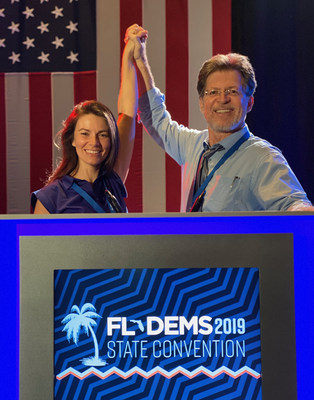 Arth agreed with delegates that private interests are profiting unfairly from the status quo. "The corporate-owned media is not kind to the idea that our country needs a systemic overhaul," Arth said. "I am on a moral crusade to help resolve festering problems with solutions that have not been fully articulated by any other candidate."

To this end, he has been increasingly active in his campaign. Arth has had diverse professional careers in architecture, construction, urban design, and public policy, as well as other fields in the arts. He received acclaim for rebuilding a slum neighborhood into the mixed-use, mixed-race, mixed-income Garden District in DeLand, Florida. He ran for governor of Florida in 2010, about which a feature documentary was made, The Politics of Michael E. Arth. He is the author of Democracy and the Common Wealth, and has made other documentaries on various subjects, including one about homelessness. He is currently making a twelve-episode TV series titled The Labors of Hercules: Modern Solutions to 12 Herculean Problems. For all these reasons, and more, Arth argues that he is the most qualified candidate for the job.

While admitting he is currently a long shot for the presidential nomination, he believes the race is still fluid, especially considering Biden and Sanders' age, health, and other issues. "Most Democrats and independents have not yet made up their minds," he said. "I could be one news cycle away from being a major candidate, and once people know about me, I will be able to further illuminate how private campaign financing is corrupting the process. I'm a policy analyst focused on issues, but generally speaking, our system selects for politicians who are good at pandering to their corporate sponsors. These pay-to-play elections orchestrated by special interests for political advantage are tearing at the fabric of our democracy. It has to change. It must change for our republic to survive."