MONTREAL, Sept. 25, 2019 /CNW Telbec/ - More than 345 volunteers including Air Canada employees took part in the first Air Canada-sponsored public cleanup in Canada on Sept. 22 at British Columbia's Garry Point Park. In the span of a few hours, the following was removed from the shoreline:

"We commend the participants who came together and braved the rain to achieve these results, leaving another community ocean shoreline in better condition. Air Canada's environment commitments include reducing its use of single-use plastics and as part of a multi-pronged strategy, we have partnered with 4ocean, an organization which seeks to reduce plastic and trash pollution in oceans around the world," said Teresa Ehman, Senior Director, Environmental Affairs at Air Canada.

Air Canada has made sustainability central to its decision-making and business processes and has developed detailed strategies for its environment responsibilities. With a four-pillar approach to reducing emissions through technology, operations, infrastructure and economic instruments, the airline has also designed a wide-ranging approach to reducing its use of single-use plastics. One important aspect was to identify all single-use plastics items used onboard flights to determine whether each single-use plastic item is truly necessary and whether there's a more sustainable alternative or a possible change in process that would result in using less plastic.

So far, Air Canada has said #BonVoyagePlastic to 36.8 million single-use plastic items in 2019 by switching from plastic stir sticks onboard flights to sustainable wood ones, phasing out the plastic wrap from its amenity kits and removal of plastic from children's packs.

Air Canada's partnership with 4ocean complements its corporate waste reduction efforts by broadening its environment responsibility to also leave less and do more in the communities where the airline operates. In 2019, 4ocean cleanup events powered by Air Canada were completed in Florida where many of its US-based employees are located, and in Richmond, British Columbia, home of the airline's primary trans-Pacific hub. Drawing from their years of experience, 4ocean will also participate with the Air Canada team to develop educational resources on ocean conservation. To date, 4ocean has removed more than six million pounds of trash from the ocean and coastlines.

Among its other environment sustainability initiatives, Air Canada has also partnered in biofuel research in cooperation with the Canada Biojet Supply Chain Initiative (CBSCI) and the Civil Aviation Alternative Fuel Contrail and Emissions Research (CAAFCER). It has invested significantly with a $10 billion fleet renewal program that has given it one of the most modern, fuel efficient fleets in the world. It maintains innovative recycling, scholarship and community activity programs, that also involve employees in environmental activities. The carrier became the second North American carrier to become an official member of the United Nations Global Compact (UNGC) Network earlier this year and is committed to the advancement of the United Nations Sustainable Development Goals. More information about Air Canada's environment goals and programs is at: www.aircanada.com/csr and leaveless.aircanada.com.

About 4ocean
4ocean is a global company that actively removes trash from the ocean and coastlines, helps create sustainable economies around the world and inspires individuals to work together for a cleaner ocean. Global cleanup operations are funded entirely through the sale of their bracelets and sustainability products, where every item purchased funds the removal of one pound of trash from the ocean. By creating jobs, utilizing the latest technology and raising awareness about the impact of plastic and trash in the ocean, the company is building the first economy for ocean plastic and creating a cleaner, more sustainable future for the ocean. 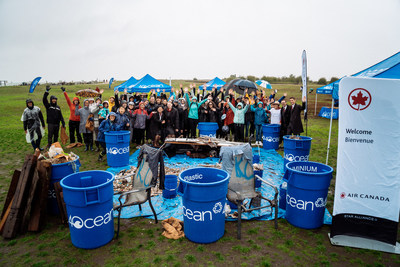