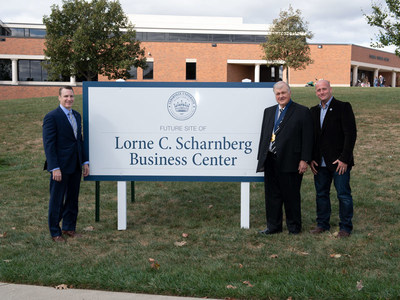 The gift was announced as a surprise to the senior Scharnberg during the president's annual State of the University chapel address in the Dixon Ministry Center this morning. Lorne Scharnberg was in attendance to receive Cedarville's prestigious medal of honor, celebrating his significant contributions to the institution and his 25 years of service on the Cedarville Board of Trustees. Scharnberg is just the 14th recipient of the medal, the last recipient being Rev. Franklin Graham, president of Samaritan's Purse and son of the late Billy Graham, in 2012.

Following the awarding of the Medal of Honor, the president revealed the $10 million gift and announced that the new business building ? one of six major building projects in the university's 10-year campus master plan ? would be named in honor of Scharnberg.

"Today I am thrilled to announce that our new school of business building will be named the Lorne C. Scharnberg Business Center," said Dr. Thomas White, president. "For years to come, there will be a stone of remembrance on this campus to celebrate all that Lorne Scharnberg and his family have done to further the mission and vision of Cedarville University. For years to come, future generations of business leaders will be trained to use their gifts for God's glory, the good of mankind and for their joy."

"My father is passionate about Cedarville's vision to transform lives for the Word of God and the Testimony of Jesus Christ," said Mark Scharnberg. "What an honor to be a part of providing a facility that will equip future business owners, entrepreneurs, and professionals to use their career as a platform for ministry. This is how my father has lived his life, and we are thrilled to continue his legacy through this gift to Cedarville."

Lorne Scharnberg served three terms as chair of the board and one year as vice chair. He joined the board in 1994 and served until moving to emeritus status in 2018. In 2007, Lorne Scharnberg was recognized as the Honorary Alumnus of the Year for his faithful service to Cedarville. He has also served on the Business Advisory Council for the school of business administration (SBA) and was named the 2005-06 executive-in-residence of the SBA.

Lorne and his late wife, Kathi, founded Katecho, Inc., a medical manufacturing business and a world leader in the manufacturing of hydrogel, in 1984. They also started Surmasis Pharmaceuticals, a contract pharmaceutical manufacturer. Kathi served the company as its chief financial officer until her passing in February 2018. Lorne remains the chief executive officer for Katecho.

Located in southwest Ohio, Cedarville University is an accredited, Christ-centered, Baptist institution with an enrollment of 4,380 undergraduate, graduate and online students in more than 150 areas of study. Founded in 1887, Cedarville is recognized nationally for its authentic Christian community, rigorous academic programs, strong graduation and retention rates, accredited professional and health science offerings and high student engagement ranking. For more information about the University, visit www.cedarville.edu.