WASHINGTON, Oct. 8, 2019 /PRNewswire/ -- The Smithsonian Institution will publish a book on the Japji, a sixteenth century poem authored by Guru Nanak, considered sacred and recited daily by many Sikhs around the world. This announcement was made by Dr. Taylor and is being released to the press by its author, Rupinder S. Brar. The Smithsonian is the world's largest museum, education and research complex. The book will be published by the Asian Cultural History Program, within its Anthropology department of the National Museum of Natural History. 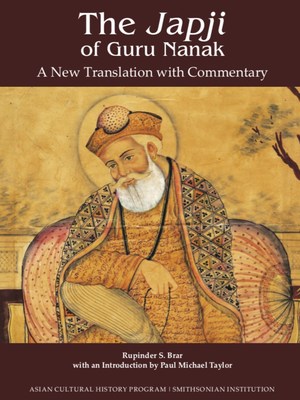 The book titled 'The Japji of Guru Nanak: A New Translation and Commentary' has an Introduction by Paul Michael Taylor, director of the Smithsonian's Asian Cultural History Program. Dr. Taylor is a noted anthropologist with a keen interest in South and East Asia. He is an author or editor of sixteen books and numerous scholarly articles on the ethnography, languages, and art of Asia. He has also curated twenty-one museum exhibitions including a traveling exhibition titled "Sikhs: Legacy of the Punjab," which opened in 2004 at the Smithsonian and has been visited by millions of visitors there and at subsequent venues.

The noted historian and writer, Professor Nikky Guninder Kaur Singh calls the book a lyrical translation of the quintessential Japji and a wonderful celebration of Guru Nanak on his 550th anniversary.

According to Dr. Taylor, the book is intended not only for Sikhs but also for the general readers unfamiliar with Guru Nanak, the author of the Japji and the first of ten Sikh Gurus. Part biography and part translation and commentary, it highlights the Nanakian values of compassion and kindness, and their commonality with modern liberal Judeo-Christian values. For example, Nanakian values such as Kirit (hard work), Naam (prayer) and Vand (sharing) echo the famous Benedictine motto, 'work and pray.'

More than one million Sikhs live peacefully in the US and Canada but are sometimes targets of xenophobia and violence due to their distinctive turbans and long beards. Sandeep Dhaliwal, the sheriff's deputy hero shot recently in Houston during a routine traffic stop, was a Sikh. Dr. Taylor hoped that the book would encourage an increased understanding of the Sikhs and broader South Asian heritage among the people of the World. The book would be available at the Smithsonian store and online.