BEIJING, Oct. 3, 2019 /PRNewswire/ -- President Xi Jinping reviewed the armed forces at the heart of Beijing Tuesday morning, his first on National Day, to mark the 70th founding anniversary of the People's Republic of China, reported by China Daily. 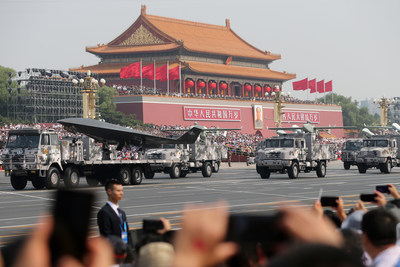 Standing in a black open-roof Red Flag limousine, Xi, also as the general secretary of the Communist Party of China (CPC) Central Committee and chairman of the Central Military Commission, gave the order to Yi Xiaoguang, commander-in-chief of the military parade, to start the review. 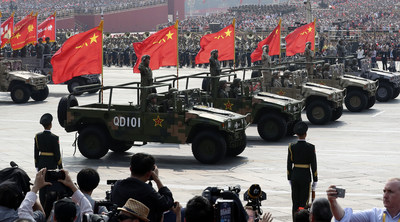 At the beginning, standing in the limo slowly passing the fluttering flags of the CPC, the nation and the People's Liberation Army (PLA) in Tian'anmen Square, Xi watched the flags with full attention as a salute.

Amid military music played by a military band, the Red Flag limo drove eastward along Chang'an Avenue, which was lined with 15 foot formations and 32 armament formations made up of about 15,000 service men and women as well as 580 pieces of armament.

Xi repeated salutes through microphone: "Salute to you, comrades!" and "Comrades, thanks for your hard work!" The soldiers replied: "Hail to you, Chairman!" and "Serve the people!"

"Follow the Party! Fight to win! Forge exemplary conduct!" the servicemen and women saluted Xi and exclaimed when the limo drove back to Tian'anmen Rostrum.

An air echelon flew over Tian'anmen Square Tuesday morning escorting flags of the Communist Party of China (CPC), the nation, and the People's Liberation Army (PLA), marking the start of the National Day military parade.

Each flag was carried by a Z-8B transport helicopter and guarded by two Z-10 armed helicopters on both sides.

On the ground, a formation of Guard of Honor marched along the east Chang'an Avenue to Tian'anmen Square, holding high the CPC flag, the national flag and the PLA flag.

A new generation of the naval forces of the People's Liberation Army (PLA) impressed the audience.

Aged 20.4 on average, the sailors are mostly selected from the Navy Submarine Academy.

From coastal waters to high seas, with the first domestically built aircraft carrier and a 10,000-tonne domestically designed and produced destroyer launched and the carrier-based J-15 fighter jets put into service, the PLA Navy has gradually developed into a strategic service with both nuclear and conventional weapons.

Its efforts in maritime rights protection, participation in the joint training in high seas and the escort missions in the Gulf of Aden also showed that the PLA Navy's development strategies have been going further in line with the rise of China as a major power.

The Chinese People's Liberation Army (PLA) presented a phalanx of officers for the first time in National Day parade.

At an average age of 38, members of the formation were from military commission authorities, theater commands, army services and armed police. The first row of the phalanx was composed of generals.

It marked the first attendance of PLASSF, a new type of combat force for safeguarding national security, in National Day parade.

350 soldiers in dark green uniforms of the People's Liberation Army (PLA) Rocket Force were reviewed in front of the Tian'anmen Rostrum.

It is the first time that the Rocket Force participates in a National Day military parade as a strategic force. It was established in December 2015 as part of the PLA's extensive military structural reform.

The predecessor of Rocket Force, the Second Artillery Force, was founded on July 1, 1966.

On behalf of the country's around one million army soldiers, the formation included soldiers from over 10 arms of services, such as infantry, armored force, artillery, air defense force, special troops, and electronic countermeasure force.

Up to 45 percent of the formation of PLAJLSF of more than 300 members came from the troop of inventory and warehousing, and 21 percent from automotive troops.

The PLAJLSF comprises the support forces for inventory and warehousing, medical services and transport. The establishment of PLAJLSF marks a revolutionary leap in reshaping the logistic system of PLA.

Female generals participate in military parade for the first time 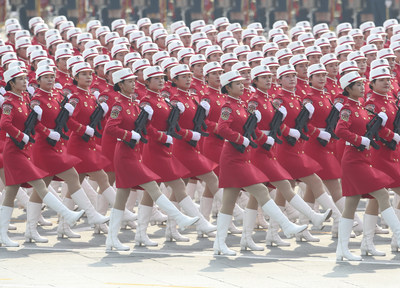 Two female generals led a formation of servicewomen in marching through Tian'anmen Square.

Major General Cheng Xiaojian and Major General Tang Bing are the first female generals participating in a military parade since the founding of the PRC.

The CAPF acts as a major force in safeguarding national security, social stability, and the people's well-being.

A formation of women militia, selected from the militia force in Beijing's Chaoyang District, marched through Tian'anmen Square.

They come from the district's education, state-owned enterprise and health sectors, as well as universities including Communication University of China, Beijing Institute of Fashion Technology and China Women's University.

Members of the formation have an average age of 26 and height at 172 centimeters, with 81 of them being mothers already. 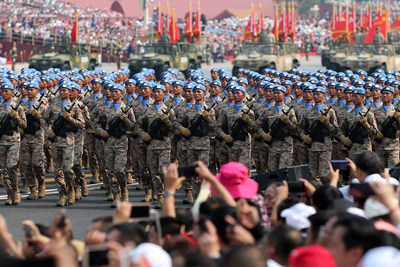 A formation of Chinese peacekeepers made their debut at the military parade.

Wearing the UN peacekeepers' blue berets and scarves, the formation of peacekeepers marched through Tian'anmen Square and was reviewed for the first time in a National Day military parade.

The peacekeepers in the formation come from troops most of which have participated in UN peacekeeping missions in Liberia, Mali, the Democratic Republic of Congo, Lebanon, Sudan and South Sudan.

China has dispatched over 40,000 personnel to 24 UN peacekeeping operations since 1990, with 13 Chinese peacekeepers sacrificing their lives in the frontline of operations.

China is the largest contributor of peacekeepers among the five permanent members of the UN Security Council. 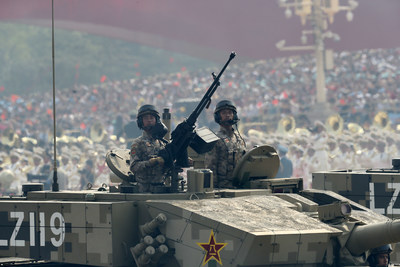 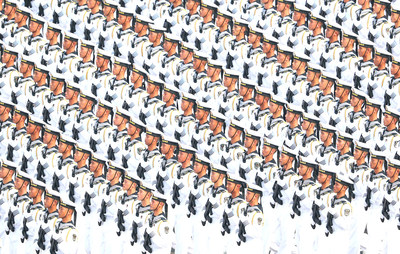 Paraders of the formation were mainly from the Falcon Commando Unit, an elite counterterrorism team under the People's Armed Police Force (PAP).

The armored anti-riot vehicles are mainly used to crack down on terrorism and violence.

The two types of fighting vehicles are important equipment of the PAP in dealing with emergencies and fighting riots.

The new-type informationized armed forces of the People's Liberation Army (PLA) made their first public appearance in a National Day military parade through Tian'anmen Square.

The forces drove through the square in four formations, each with 16 vehicles, showcasing China's new achievements in national defense and military reform in the information era.

The first formation consisted of vehicles equipped with antennas in different shapes. The new-generation informationized military equipment is capable of helping the PLA gain an upper hand in battlefields with complex electromagnetic conditions.

The second formation demonstrated four models of equipment that are important parts of the PLA's new-generation equipment system for tactical electronic countermeasure.

Covered with urban camouflage, the third formation showcased PLA's latest achievements in new mobile communication equipment, which plays an important role in beefing up the PLA's joint operations and trans-theater combat capabilities based on the network and information system.

China's unmanned aerial vehicle (UAV) phalanxes were in the spotlight in the military parade.

The weaponry includes reconnaissance drones in multi-range and multi-altitude.

Among them, a high-altitude and high-speed reconnaissance drone, the only all black-coating UAV in the parade, made public appearance for the first time.

The phalanx showcases the new-type combat force in the future warfare and all these aerial armaments reviewed are domestically-developed, said Dang Dongxing, a military official of one of the phalanxes, noting that China's unmanned combat armaments are close to or have reached the world leading level in some aspects.

Also displayed in the parade were China's reconnaissance-strike drones, such as GJ-2 and GJ-11, as well as unmanned underwater vehicles.

The upgraded Dongfeng-31A missile formation was reviewed during the National Day military parade.

The new Dongfeng-31AG missile is the second-generation solid-fuel intercontinental strategic missile developed by China, with high mobility and precision. It was the second time for this type of nuclear missiles to be reviewed.

A formation of Dongfeng-5B nuclear missiles was reviewed during the military parade.

The main body of the formation is made up of a missile brigade from the PLA Rocket Force.

Over decades of development, the brigade established in the early 1960s has successfully launched dozens of strategic missiles.

A support aircraft echelon, comprised of six types of special-purpose aircraft, flew over Tian'anmen Square in the military parade.

It is the first time for special-purpose aircraft to join a National Day military parade, according to Chen Gang, captain of the echelon's lead airplane.

China unveiled for the first time its new type of long-range strategic bombers in the National Day military parade.

The debuting H-6N is a home-made strategic bomber capable of air refueling and long-range strike. Also showcased in the parade was H-6K, a domestically-developed medium and long-range bomber.

An echelon of three H-6N and six H-6K bombers flew over Tian'anmen Square.

The bombers are under the command of a division of the aviation forces of the People's Liberation Army's air force that has carried out many major missions, including air-dropping atomic and hydrogen bombs.

In recent years, China's special-purpose aircraft have completed a number of major missions, including patrols in the East China Sea and the South China Sea.

The echelon consists of the KJ-500H and KJ-200H early warning aircraft, the Y-8 anti-submarine patrol aircraft and the Y-8 technical reconnaissance aircraft.

An echelon of military transport aircraft flew over the Tian'anmen Square.

China's newly-commissioned Z-20 helicopter made its first public appearance on Tuesday, as the main battle equipment of the aviation force of the People's Liberation Army Army (PLAA) was reviewed during the massive National Day parade.

Five J-20 stealth fighters flew over the Tian'anmen Square in the military parade.

They formed an echelon alongside five J-16 fighters and five J-10C fighters.

An echelon of aircraft carrier-borne fighter jets flew over the Tian'anmen Square during the military parade.

The J-15 planes have successfully accomplished takeoff and landing tasks at night on the Liaoning, China's first aircraft carrier, showing that all the technical difficulties regarding carrier-based landing had been overcame, Zhang Ye, an officer of the People's Liberation Army Navy, told Xinhua.

China has unveiled two aircraft carriers. The Liaoning was commissioned in September 2012, and the second has conducted successful sea trials.