TORONTO, Oct. 2, 2019 /CNW/ - Life is hectic and we often don't take the time to think about where our food comes from and how it got to our plate. When it comes to eating meat, many people aren't aware how animals on farms are raised and the suffering they endure. 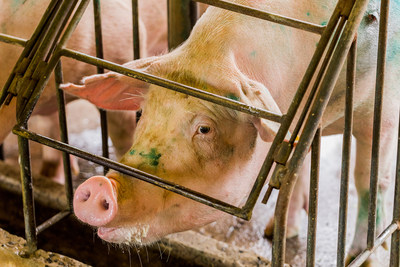 That's why World Farm Animals Day (October 2nd) is important to acknowledge. Created in memory of Mahatma Ghandi, the day highlights the suffering of billions of farm animals living in poor conditions on factory farms around the world. And to push for changes to be made to improve farm animals' lives. Ghandi believed in treating all living beings with respect and this is an essential component of a compassionate and just society.

In Canada every year, about 700 million animals are slaughtered for food. One of the most intensely farmed animals are pigs. Breeding mother pigs (sows) in Canada and globally suffer daily. These social, sensitive beings are as smart as a three-year-old child and as playful as a dog, yet they are confined in gestation crates (pregnancy cages), not even able to turn around.

There are codes of practice created by the National Farm Animal Care Council (NFACC) in Canada which set standards for on-farm animal care, however, although some producers try to follow the codes, they are not obligatory.

The most recent Pig Code of Practice mandates the phasing out of gestation (pregnancy) crates by 2024 and requires producers to keep mother pigs (sows) in group housing. Similarly, seven of Canada's largest grocery retailers that are part of the Retail Council of Canada, including Loblaw, Sobeys and Walmart Canada, made a commitment to end the use of gestation crates in their supply chain by 2022.

"As these dates draw near, neither the pork industry nor the retailers have reported on their progress," says Lynn Kavanagh, Campaign Manager with World Animal Protection.  "We know the majority of the public cares deeply about this issue and finds the confinement of animals to be unacceptable.  We hope that the industry and retailers will report on their progress and let the public know they're staying true to their animal welfare commitments. Openly reporting on progress is the best way to earn public trust."

And as we wait to hear an update, mother pigs continue to suffer. Not only are they confined in gestation crates, but when they are due to give birth, they are moved to a farrowing (birth) crate where they are confined for 3-4 weeks during birthing and nursing. They are prevented from contact with their piglets. Their offspring are then raised for meat and kept in barren conditions with concrete floors and little enrichment. Piglets' teeth are clipped, their tails are cut, and males are castrated, all in the first weeks of their lives, often without pain relief. These procedures are done for production and economic reasons. Instead of improving the environment in which the pigs live, the industry chooses to mutilate its animals.

These deprived and barren environments cause pigs to experience mental, physical and psychological distress.

Part of World Animal Protection's campaign "Raise Pigs Right", is working with producers and companies to encourage the adoption of higher welfare systems. This includes getting pigs out of cages and into social groups, ending painful mutilations and providing enrichment. Ending the use of gestation crates is the first step but more needs to be done to ensure pigs have a decent quality of life.

The United Kingdom's new pig code, for example, mandates that pigs have permanent access to enrichment materials, such as straw, to satisfy the animals behavioural needs to play and explore. It also prohibits cutting their tails. These are important changes and those World Animal Protection would like to see the industry in Canada adopt.

And so, as World Farm Animal Day is recognized, it's a time for Canada to be a leader in improving the lives of pigs and other farm animals.

About World Animal Protection
From our offices around the world, including Australia, Brazil, Canada, China, India, Kenya, the Netherlands, US and UK we move the world to protect animals. During 2018 we gave more than 3 billion animals better lives through our campaigns that focus on animals in the wild, animals in disasters, animals in communities and animals in farming.  https://www.worldanimalprotection.ca/our-work/animals-farming