Lleida.net Signs Two Interconnection Agreements With China Mobile and China Telecom and Will Have Access to One Billion Chinese Customers 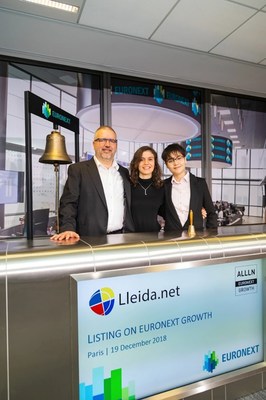 Through these agreements, signed on August 30 and August 21, Lleida.net customers will be able to directly access China Mobile and China Telecom's networks, while both Chinese operators will be able to use the interconnection and transit network to other operators offered by the Spanish corporation.

This agreement will strengthen Lleida.net's position in China, where it has already been granted three patents regarding technological certification services.

"With this agreement, we add more than one billion subscribers to our direct interconnection and transit to third parties network and thus, it will strengthen our capabilities in Asia. It is a great milestone for us, and one that will bring benefits to our customers and shareholders in the immediate future," says Sisco Sapena, CEO of Lleida.net.

The corporation, born in 1995, became last December the first Spanish company to be dually listed on both Madrid's Alternative Stock Market (MAB) and Euronext Growth.

In addition, during 2018, it became the first and sole Spanish provider, sixth at a European level, to obtain the approval of qualified certified electronic delivery services as stated by the EIDAS regulation.

This approval allows certified electronic delivery companies to operate within the EU without national limitation. Communications sent using the Lleida.net network are then admitted at any time by European courts and public administrations as due proof.

During the 2Q of 2019, Lleida.net registered a 3.22 million euros net income, 3% more than during the same period of the previous year.

In the first six months of this 2019, it registered a 1.68 million gross margin, 15% superior to that registered in the first half of 2018. Ebitda remained stable and around half a million euros.

Chinese and U.S. market actors can invest in the company via the Paris or the Madrid Stock Exchange.