MONTEREY, Calif., Sept. 21, 2019 /PRNewswire/ -- NTT IndyCar Series rookie standout Colton Herta edged five-time series champion Scott Dixon to claim the pole today for Sunday's season-ending Firestone Grand Prix of Monterey.  In an exciting final round of knockout qualifying, Herta's last lap time of 1:10.1405 bettered Dixon's best effort by just over four one-hundredths of a second.  Today's run is the third pole of the season for Herta, and the eighth of the 2019 season for Honda. 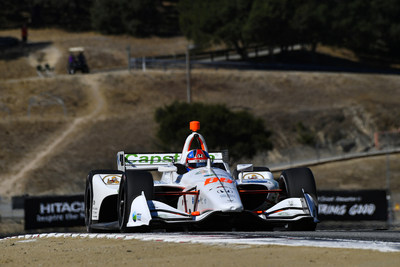 Dixon will start on the outside of the front row, second, as the Chip Ganassi Racing driver maintains an outside shot at claiming his sixth series championship in tomorrow's 90-lap contest.  Primary championship contenders Alexander Rossi and Josef Newgarden will start third and fourth, respectively.  Advancing to the "Fast Six" final qualifying round for the third time this season, James Hinchcliffe qualified fifth in his Arrow Schmidt Peterson Motorsports Honda; while the fourth and final championship contender, Simon Pagenaud, will start sixth.

Heading into tomorrow's season finale, Honda holds a 34-point advantage over Chevrolet in the battle for the 2019 Manufacturers' Championship (1351-1317).  In the Drivers' Championship fight, Rossi trails Newgarden by 41 points (593-552).  Pagenaud lies third with 551 points, while Dixon rounds out the title hopefuls with 508 points.  This weekend's season-finale race is a "double-points" event, with 100 points awarded for a race win rather than the usual 50.

Television coverage of the final round of the 2019 season begins at 2:30 p.m. EDT Sunday on NBC.

Colton Herta (Harding Steinbrenner Racing Honda) Pole qualifier, third pole of 2019 in his rookie IndyCar Series season: "This team has been great all weekend, and the car is phenomenal.  We've had such good pace.  It seems like we've made some real gains in recent weeks, both on the team side and my side.  At the start of the year, I was hoping to be in this position by the end of the season ? fighting for top six starting positions.  Once you know you can do it [qualify on the pole] it kind of relieves a lot of the stress.  You know you can make the fast six [final qualifying] and will be really disappointed if you don't.  I'm really looking forward to the start of the race tomorrow from the best seat in the house!"