EAST HARLEM, N.Y., Sept. 13, 2019 /PRNewswire/ -- Potamkin Development is honored to be a sponsor for Uptown Grand Central's new mural project, which will cover more than 1,500 feet of green construction panels around the 125th Street Metro-North station in East Harlem. Over three installation days in September, the area will be transformed from a bleak landscape to a vibrant corridor of art and culture. 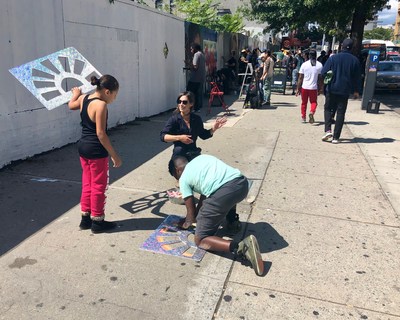 The event began on Saturday, September 7th and was covered in the NY Daily News as well as being featured on local news channels ABC-7, NY1, and PIX11. Artists and volunteers, including Andi Potamkin, President of Potamkin Development, joined together to begin transforming the dull green plywood surrounding Metro-North corridor on 125th and 124th streets. By the end of the day, nearly 20 murals had been completed by participating local artists.

Andi Potamkin said: "Uptown Grand Central is making invaluable contributions to the 125th Street Corridor, and we jumped at the opportunity to help bring art into this public space. Spending the first installation day volunteering with Uptown Grand Central to provide supplies and support to these incredible street artists was such a rewarding way to see this project come to life and to personally engage with the community."

As a company that values making sure that neighborhoods are beautiful, livable spaces, Potamkin Development was a natural sponsor for the Uptown GrandScale project.

The Uptown GrandScale project will continue on September 14 and September 22, featuring over 50 artists chosen with preference given to applicants from Harlem, Upper Manhattan and the Bronx. Women, who have been historically underrepresented in the field of street art, feature strongly in this group of artists.

Potamkin Development is a part of the Potamkin group of companies, which also includes Potamkin Automotive Group and Potamkin Investments, an investment management and private equity firm. The company was founded as Potamkin Automotive Group in 1954 by legendary entrepreneur Victor Potamkin, and soon grew to be one of the largest automotive dealerships in the nation. The family-owned business is now run by Victor Potamkin's sons, Alan and Robert. Andi Potamkin is President of Potamkin Development, which acquires and develops real estate nationwide, specializing in modern and creative solutions for large-scale automotive needs within highly populated cities. Among its current projects is a state-of-the-art, environmentally conscious fleet maintenance facility in Upper Manhattan. Potamkin Development is proudly partnering with the city of New York on multiple current projects.