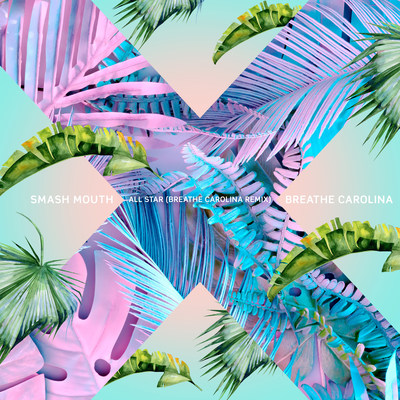 From the breezy whistling intro to the bongo-esque beat, "All Star (Breathe Carolina Remix)" infuses the pop-rock anthem with a happy-go-lucky sensibility that underscores the song's timeless appeal. Breathe Carolina, a new entry on DJ Mag's Top 100 DJs list in 2018, hailed for "combining punk rock roots with dance music's urgency and rhythm," bring tropical house elements into the production, a path they also explored last year on "My Love" with Belgium's Robert Falcon.

"Over the years, it seems like hundreds of remixes of 'All Star' have emerged, and we as a band are flattered and grateful for the love and attention," said Smash Mouth. "We have not commissioned an 'official' remix to celebrate the 20th anniversary of our hit 'All Star'... Until now. We are very excited to have such a great artist like Breathe Carolina create this very fresh and inspiring official remix for us. We are big fans of this duo and absolutely love their take on our biggest hit. Please take a listen as we know you will love it, too..."

"'All Star' was a huge part of our early lives; it was such a big song when we were growing up," said Breathe Carolina. "To think that we got to take it and give it a modern twist is so crazy!"

Multiplatinum California pop rock band Smash Mouth have seen "All Star" rule the charts (No. 1 Billboard Top 40 for six weeks and No. 4 Billboard Hot 100), conquer Hollywood (becoming a worldwide smash via its placement in Shrek), inspire stadiums full of sports fans, and enjoy a more recent resurgence, being repurposed into countless YouTube videos and internet memes. In a recent in-depth 20th anniversary oral history feature, Rolling Stone's Brittany Spanos explored the song's indelible mark on popular culture, which began when Smash Mouth "went into the studio to prove they weren't a one-hit wonder and the song they recorded ["All Star"] has been playing straight since."