The activity of 2019 "China Now: Silk Road Rediscovery Tour of Beijing Upon the 70th Anniversary of the PRC" officially launched

BEIJING, Aug. 20, 2019 /PRNewswire/ -- As reported by Crionline, on the morning of August 20, the launching ceremony of 2019 "China Now: Silk Road Rediscovery Tour of Beijing Upon the 70th Anniversary of the PRC" was held at the Tongxing Square of the Beijing Expo 2019. Participants, from 13 countries along the Belt and Road, started their journey and interview in Yanqing to demonstrate Beijing image and convey China's voice to the world. 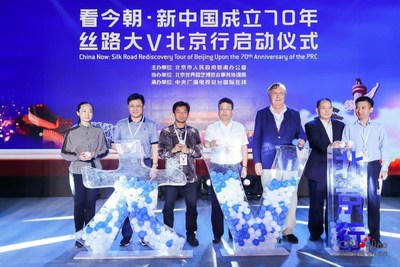 As China's political center, cultural center, international exchange center, and scientific and technological innovation center, Beijing has made obvious headway in term of economic and social development since the founding of the People's Republic of China 70 years ago. Xu Hejian, Deputy Director of Publicity Department of Beijing Municipal Party Committee and Director of Information Office of People's Government of Beijing Municipality, cited in his speech that "Silk Road Rediscovery Tour of Beijing" serves as vivid practice that promotes civilization dialogue, strengthens exchange and manifests mutual learning and interaction. He hoped that all the participants, through this activity, can discover a brand-new Beijing that is not only the most active city for innovation and entrepreneurship, a city of high-quality development, an open city with a world-class business environment for development, a cultural city with equal emphasis on cultural protection and development, but also a city of green development. "I hope all you friends will share what you see and hear in Beijing on your own communication platform, record Beijing through your cameras and write encouraging and human-interest stories of Beijing, what you see and hear in Beijing, record Beijing with your cameras, and write stories of Beijing, in order to show the world a three-dimensional and diverse Beijing, promote the construction of the Belt and Road and make joint efforts for building a community of common destiny for all mankind," Xu Hejian said.

Beijing Expo 2019 is a linking bond for the exchanges of horticultural culture between China and the world, said Ye Dahua, Deputy Director-General of Expo's Coordination Bureau. It is also an important event that can promote the mutual sharing of the latest achievements in green development between different countries, deepen the communications and mutual learning among countries in the fields of horticulture, sustainable development, economy and trade, humanities, etc., and can also advance the construction of the Belt and Road. He hoped that all the guests visiting the Beijing World Horticultural Exhibition will have chances to listen to the Chinese horticultural stories, learn about the achievements of China's ecological civilization, so that the green development concept displayed by this Beijing Expo 2019 can be spread throughout the world.

Zang Julin, President of CRI Online, said in his speech that CRI Online is the flagship media of the national-level external publicity and the backbone for the cultural exchanges along the Belt and Road. Since 2012, CRI Online has teamed up with Publicity Department of Beijing Municipal Party Committee, focusing on the "four centers" function of Beijing, actively spread the image of Beijing, a world-class city with harmonious and livable characteristics. Zang Julin said that this year marks the 70th anniversary of the founding of the People's Republic of China, as well as the fourth year of the "Silk Road Rediscovery Tour of Beijing" event. He hoped that in this event, all the participants can learn about the achievements Beijing has made in its ecological construction, and enjoy the profound historical and cultural deposits of Beijing as well as its innovative creativity and new vitality under the Belt and Road Initiative. He also hoped that through the lens and languages of all the participants, the charm of Beijing will be shown to the world, truly and objectively, so that contributions can be made to the Belt and Road Initiative and to a new chapter of cooperation and development between China and the world.

Participants of this activity are think tank experts, senior media and renowned writers from 13 countries including Cambodia, Canada, Indonesia, Iran, Germany, Kenya, South Korea, Myanmar, Pakistan, Russia, Serbia, Thailand, and Turkey. Hans d'Orville, Chief Advisor of International Center for Creativity and Sustainable Development under Auspices of UNESCO, delivered a speech as the representative of the participants, in which he said that the Belt and Road Initiative emphasizes the importance of international cooperation, and this event is also the best proof of the joint construction that goes beyond the geological constraints for a cooperation relationship. Hans d'Orville also said that the ongoing Beijing Expo 2019 highlights Beijing as a cosmopolitan city with world-class organizational capabilities for hosting global events, and the Olympic Winter Games to be held in 2022 will be another opportunity to show the capabilities of Beijing as well as China. "I can't wait to see how the 'Water Cube' will turn into an 'Ice Cube'," said Hans d'Orville.

Harryandi Hafide, a professional photographer from Indonesia, came to Beijing for the first time. At the launching ceremony, he shared the pictures he took expressing his views on "the first sight of Beijing".

The activity of 2019 "China Now: Silk Road Rediscovery Tour of Beijing Upon the 70th Anniversary of the PRC" was officially launched

In the following itinerary, the participants will also visit the Exhibition Center of the Beijing Organizing Committee for the 2022 Olympic and Paralympic Winter Games, Shijia Hutong Museum, exhibition center of Zhongguancun Science Park, 798 Art Zone and other places. Therefore, they may get an in-depth understanding of the achievements Beijing has made in the "four centers" construction and in areas of international cooperation, ecological construction, people's livelihood services, cultural heritage and innovation during the past 70 years since the founding of the People's Republic of China.