OAKVILLE, ON, Aug. 19, 2019 /CNW/ - Taiho Pharma Canada, Inc., a Canadian subsidiary of Taiho Pharmaceutical Co., Ltd. (Japan), today announced that Quebec is the first province to make LONSURF accessible with reimbursement under the Régie de l'assurance maladie du Québec (RAMQ).ii This critical listing follows a positive clinical recommendation by the Institut national d'excellence en santé et en services sociaux (INESSS) recommending that the Minister include LONSURF® (trifluridine and tipiracil [as tipiracil hydrochloride] tablets) on the List of Medications for the treatment of adult patients with metastatic colorectal cancer (mCRC) who have failed on previous standard therapies.iii 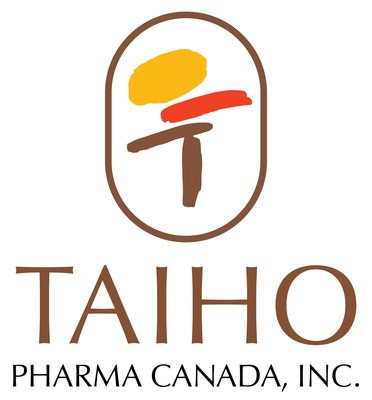 In advanced stages of colorectal cancer where the cancer has spread to distant parts of the body such as the liver, lungs, or distant lymph nodes (also called stage IV) the five-year survival rate is only 14 per cent.vi  In the past five years, only two new therapies for mCRC have been approved by Health Canada. Chemo-refractory mCRC remains an area of unmet therapeutic need.vii LONSURF has been shown to extend overall survival in patients with mCRC.viii

"The RAMQ public listing is welcome news for patients in Quebec who are living with this devastating disease," said Barry D. Stein, President, Colorectal Cancer Canada. "It is unfortunate, however, that people living in the rest of Canada, are not yet able to receive public reimbursement for this drug which has the potential to provide additional valuable time and quality of life for patients with advanced colorectal cancer." Last month the pan-Canadian Oncology Drug Review (pCODR) did not recommend the reimbursement of LONSURF, despite the positive input from Colorectal Cancer Canada, colorectal cancer patients and their caregivers as well as from physicians from across Canada. "The pCODR decision will have the effect of depriving patients of access to an effective treatment and further demonstrates the unfairness of unequal access to cancer drugs in Canada," added Mr. Stein.

"At Taiho Pharma Canada, we are determined to help patients with mCRC access LONSURF which has been shown to extend life and provide quality of life," said Ross Glover, General Manager of Taiho Pharma Canada Inc. "We will continue to work diligently with all regulatory authorities ? including pCODR and Cancer Agencies across Canada- so that any patient who may benefit from this treatment can have access to it."

About LONSURF
LONSURF is an oral nucleoside antitumor agent discovered and developed by Taiho Pharmaceutical Co., Ltd. LONSURF (trifluridine and tipiracil [as tipiracil hydrochloride] tablets) is indicated for the treatment of adult patients with metastatic colorectal cancer who have been previously treated with, or are not candidates for, available therapies including fluoropyrimidine-, oxaliplatin- and irinotecan-based chemotherapies, anti-VEGF biological agents, and, if RAS wild-type, anti-EGFR agents.i  Since 2015, Taiho Pharmaceutical and Servier have been in an exclusive license agreement for the co-development and commercialization of LONSURF in Europe and other countries outside of the United States, Canada, Mexico, and Asiax. As of July 2019, LONSURF has been approved as a treatment for advanced metastatic colorectal cancer in 68 countries and regions worldwide.

About Taiho Pharma Canada, Inc. (Canada) Taiho Pharma Canada, Inc., a Canadian subsidiary of Taiho Pharmaceutical Co., Ltd. (Japan), is located in Oakville, Ontario and managed by Taiho Oncology, Taiho's U.S. R&D and commercial operations, based in Princeton, New Jersey. Taiho Oncology has established world-class clinical development and commercial organizations that work urgently to develop and market innovative cancer treatments in the U.S. and Canada. Taiho Oncology Inc. has an oral oncology pipeline consisting of both novel anti-metabolic agents and selectively targeted agents. Advanced technology, dedicated researchers, and state of the art facilities are helping Taiho define the way the world treats cancer. It's our work; it's our passion; it's our legacy.

*Full product indication: LONSURF® (trifluridine and tipiracil [as tipiracil hydrochloride] tablets) is indicated for the treatment of adult patients with metastatic colorectal cancer who have been previously treated with, or are not candidates for, available therapies including fluoropyrimidine-, oxaliplatin- and irinotecan-based chemotherapies, anti-VEGF biological agents, and, if RAS wild-type, anti-EGFR agents.