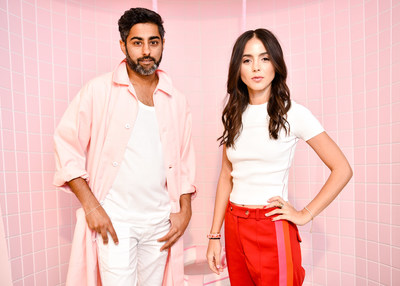 "We created Figure8 to chart the future of how Millennials and Gen Z will want to  spend their time. Over the past 3 years building Museum of Ice Cream, we have learned so much from our guests and gained endless insight. Globalization and technology have made the world smaller, yet people are more lonely than ever," said Maryellis Bunn, 27-year-old Co-Founder of Figure8 and Museum of Ice Cream. "I want to inspire people around the world with what I call experiums, emotional and transformative moments and spaces for people to reconnect with themselves and those around them."

Since Museum of Ice Cream's conception in 2016, it has catapulted a cultural phenomenon and ignited an entire experiential industry. The company has welcomed over 1.5M visitors to locations in Los Angeles, New York, Miami, and San Francisco. The brand launched an ice cream line sold at Target and created high-profile partnerships with Platinum Card by American Express, a makeup collection with Sephora, and a kids clothing line at Target.

"Museum of Ice Cream receives an overwhelming amount of requests from companies asking us to design branded experiums for them," said Manish Vora, Co-Founder of Figure8. "Now we can answer this need and more. Figure8 will expand internationally, rolling out a new Museum of Ice Cream location each quarter while also launching new Figure8 brands and working on commissioned special projects."

Will McClelland, Co-founder of Elizabeth Street Ventures, joins the board of Figure8. "Figure8 and Museum of Ice Cream are built on core tenets of imagination, connection and creativity. These are things that are part of a shared human experience and so important to how we live and improve our daily lives," says McClelland.  "Elizabeth Street is incredibly excited to support this endeavor and bring memorable experiences to people around the world."

Frederic Mayerson, Chairman & Managing Partner of Maywic Select Investments, said, "Museum of Ice Cream has redefined the expectations and influence of experiences with explosive growth. Figure8's team has a unique ability to tap into the mindset of today's customers and will continue to revolutionize the industry it has helped create."

Figure8 currently has a team of 35 at its NYC headquarters and is growing its senior leadership for global expansion. Andrew Lumsden joins as SVP of Operations, bringing over 20 years of experience working with food, beverage, and hospitality brands including Zuma, The Ace Hotel, The Spotted Pig, Noho Hospitality and Stephen Starr. Peter Sun joins the team as Vice President, Brand & Marketing with over a decade of experience building global brands including P&G, Unilever, Hilton, LVMH, HSBC, Volvo, and more.

FIGURE 8
Figure8 is an experience first company that creates experiums, places outside of distraction, away from expectation, and beyond inhibition to get lost and found. We invite guests to take a moment to recognize, realize, and reignite relationships with the people and places around them. The potential is limitless.