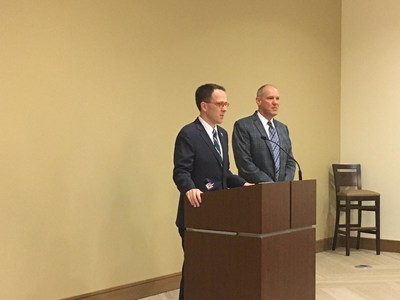 "By recruiting 90 new officers every year, we have undertaken the largest single-year hiring of new police officers in Tulsa's history and are implementing one of the most comprehensive community policing initiatives in the nation," he said.

By prioritizing national and international competition through major reforms and investments in Tulsa, the mayor said his new vision for Tulsa has shifted focus away from the previous session's city versus suburbs approach. "We are building an economy and infrastructure that reflects our vision to make Tulsa a diverse, world-class city. Our new vision has redefined standards and raised the level of expectation from our office. Now, it is no longer enough to have a safe community; we must have one of the safest. Our plan for economic development is not so much about competing with Broken Arrow, Jenks or Owasso; it is about working with them to compete with major cities around our country and the world."

Towards this end, the mayor has implemented the largest economic development capital improvements program in Tulsa's history ? Vision Tulsa ? to bring exciting new changes to the city including a lake in the Arkansas River, bus rapid transit lines transforming the use of public transportation and USA BMX conducting Olympic training and trials in the Greenwood District of North Tulsa. The mayor said the Vision Tulsa initiative also includes a facility worthy of the greatest collection of western art in the world under construction at the Gilcrease Museum.

Highlighting plans to make Tulsa a more welcoming place for new citizens under the city's New Tulsan's Initiative, the mayor emphasized the need to connect Tulsa's growing immigrant community with new opportunities in education, employment, and leadership. "One of the great travesties in our country right now is that we are spending far too much time focusing on illegal immigrants and not nearly enough on ensuring that our country remains a beacon of hope and opportunity for people from all around the world. I want Tulsa to be that place for people."

Addressing the occasion, Zarrow Pointe CEO, Jim Jakubovitz thanked the mayor for his time and pledged the Zarrow Pointe community's full support to his office. "All of us present in this room are grateful for all your efforts and stand ready to support you in every way possible."