TORONTO, July 25, 2019 /CNW/ - As Autonomous Vehicles begin hitting the road, the push for innovation will continue to ensure new technologies are implemented safely and effectively. 407 ETR, in partnership with 3M Canada, has started this process by testing the use of 3M's pavement marking tapes optimized for Advanced Driver Assistance Systems (ADAS) on 2.5 km of lanes on Highway 407 ETR.  This initiative is part of the 407 ETR Living Labs program of innovation, promoting safety and next generation transportation. 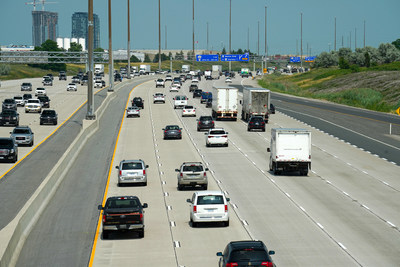 The previous generation of lane markings are on the road eastbound from Highway 427 with some being traditional white and the rest being contrast tape markings.  The retro-reflective high contrast tape markings are being tested eastbound, east of the Humber River to Weston Road in lane 2 both sides (second lane from left) - half of the distance has the first generation 7-inch-wide contrast tape and the remainder has the next generation 10-inch-wide contrast tape, the first such installation in Canada. Both are wet reflective contrast tape, the 10 inch having been designed specifically to work better with ADAS and autonomous vehicles. The lane markings performed well during the winter and during the rainy spring period experienced this year.

Lane markings have traditionally helped delineate the lane to help drivers stay in their lane.  The new lane marking technology being put onto the road by 407 ETR will now help ensure both humans and machines can make the most of the fast, safe and reliable ride 407 ETR offers all drivers. We invite input from drivers of vehicles with ADAS using this area to share their experience in this Living Lab environment.  Input may be sent to 407 ETR's social media account on Twitter @407ETR or by email to communications@407etr.com

"Our history with 3M Canada and their ability to innovate gives 407 ETR confidence in utilizing their products on our roadway," said Craig White, Vice President of Highway and Tolling Operations for 407 ETR. "With success and support using 3M products in the past, the pilot project using 3M Connected Roads Contrast Tape made sense. It's important we remain ahead of the game when it comes to autonomous vehicles for the safety of drivers and passengers alike."

"Working with the 407 ETR, a trusted and valued partner, allows us to prepare and optimize roadways for ADAS of today and emerging autonomous vehicle technology. Validating our products in our unique Canadian climate helps us bring new technology to road-users and keep our roadways safe for all drivers" said Jonathan Cliffen, Connected Roads Lead, 3M Canada.

3M's ADAS-optimized Contrast Tape delivers a unique contrast between black and white and allows for improved detection, especially on a low contrast pavement such as concrete. The new road markings are designed to work with how machines see and read infrastructure as well as being readable to humans.  There are four strengths in the new lane markings that are particularly important to 407 ETR:

407 ETR is investing in innovation and preparing for Advanced Driver Assist Systems now to ensure we lead on safety and prepare for the continued roll-out of autonomous vehicles in the future.

The installation, by Total Traffic Services Inc., was done literally overnight and had the highway ready for the morning commute. 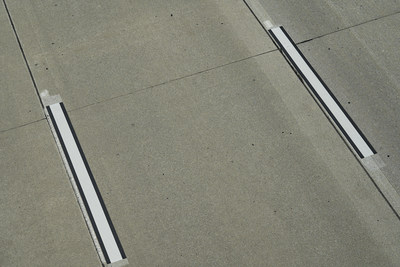