MADISON, Ill., July 15, 2019 /PRNewswire/ -- Subaru Motorsports USA made it three event wins through three rounds of the 2019 Americas Rallycross (ARX) season with a pair of victories at the inaugural ARX of Gateway doubleheader weekend. Chris Atkinson earned the Saturday win with a thrilling last-corner pass in the final race, while teammate Patrik Sandell won the Sunday final with a wire-to-wire drive from pole position. Scott Speed followed up his win in June's season opener at Mid-Ohio with four qualifying heat wins, a semifinal win and second place in the Sunday final to extend his championship lead. 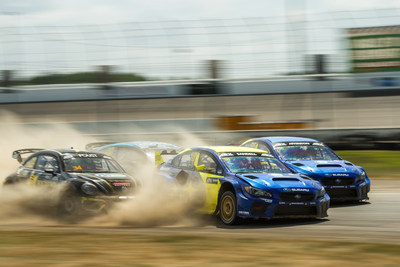 With two full rallycross events packed into a single weekend, the first-ever ARX doubleheader weekend offered plenty of thrills. Speed was fast early in the Day 1 qualifying rounds, while Sandell took second close behind his teammate. Speed would win his semi-final to earn pole position on the final grid, with Sandell holding third position and Atkinson slotting into the fifth grid spot on the back row. Speed suffered a flat tire early in the final race and was forced to drop back, leaving Atkinson and Sandell to chase down Ford driver Steve Arpin in the lead. After relentlessly closing on Arpin over the last three laps, Atkinson dove down the inside in the final corner and nosed his WRX STI over the line first ? earning his first-ever rallycross win for Subaru ? while Sandell made the podium in third.

On Sunday, Speed again paced the field in qualifying with a pair of heat wins. Driving from pole position in the first semi-final, the reigning series champion was nearly spun by a competitor and pushed to the back of the field, eventually fighting back to third and earning a spot on the back row of the final. Starting from row two of the second semi-final, Sandell stayed patient and executed a clean mid-race pass for the lead to earn himself pole position in the final. In the weekend's last race, Sandell launched well and carried the lead into the first turn, then clicked off fast, clean laps to lock up his first win. Speed, pushing hard from the back row, hunted down rival Tanner Foust to earn second.

"Amazing feeling to win from the back row!" said Atkinson after the Saturday final. "My day was up and down so I wasn't sure what to expect in the final. When I found myself in second and catching up on the last lap I knew I had to make a move, so I thought why not give it a go on the last corner?"

"Three races, three winners, and it's all Subaru," said Sandell. "This is the most fun track in the series and it was such an awesome weekend. There are some really fast dirt sections here which I really like, so when I got the win in the semis I knew I would have a great chance to win if I got the launch right. The whole Vermont SportsCar team has worked so hard to get here, and it's finally starting to show."

With all three Subaru Motorsports USA drivers notching event wins through the first half of the six-event ARX season, the team will look to keep the momentum going August 3-4 in Trois-Rivieres, Quebec.

About Subaru of America, Inc.
Subaru of America, Inc. (SOA) is a wholly owned subsidiary of Subaru Corporation of Japan. Headquartered at a zero-landfill office in Camden, N.J., the company markets and distributes Subaru vehicles, parts and accessories through a network of more than 630 retailers across the United States. All Subaru products are manufactured in zero-landfill production plants and Subaru of Indiana Automotive, Inc. is the only U.S. automobile production plant to be designated a backyard wildlife habitat by the National Wildlife Federation. SOA is guided by the Subaru Love Promise, which is the company's vision to show love and respect to everyone, and to support its communities and customers nationwide. Over the past 20 years, SOA has donated more than $145 million to causes the Subaru family cares about, and its employees have logged more than 40,000 volunteer hours. As a company, Subaru believes it is important to do its part in making a positive impact in the world because it is the right thing to do.