ORANGE, Calif., June 17, 2019 /PRNewswire/ -- On Wednesday, June 12, after the last bingo number was called inside the sprawling multipurpose room of the Orange Senior Center in Orange, Calif., the seniors in attendance were treated to another set of numbers they were not so excited to hear: Scams cheat older Americans out of about $36 billion a year. 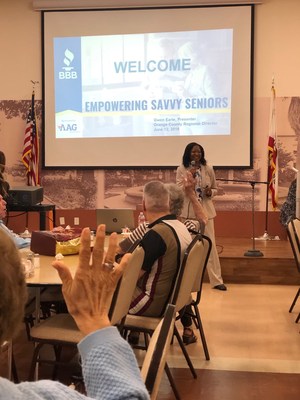 This was just some of the information presented at the popular Savvy Seniors event produced by the Better Business Bureau (BBB) and American Advisors Group (AAG) to help older Americans better recognize and defend themselves against the latest iteration of increasingly sophisticated scams aimed at trusting seniors.

Over the course of the full one-hour program, Gwen Earle, BBB Orange County Regional Director, alerted her engaged audience to a number of trending scams, including the now infamous grandmother ruse that costs the average victim about $4,000.

Earle's presentation spurred lots of spirited follow-up questions and even a ripple of laughter when she asked if any of her elderly guests were currently involved in an online dating relationship, another popular scam that preys on the lonely hearts of seniors hoping to make late-in-life romantic connections.

Orange resident Robert Henson was glad he had attended the Savvy Seniors workshop.

"I thought it was great because there are seniors who are losing money and spending money right out of their retirement and thinking they are helping themselves when they are actually being ripped off ? and it's devastating," Henson said.

Henson said he himself had been a recent fraud victim when his bank notified him that someone had fraudulently charged over $1,000 to his debit account. "Fortunately, they called me and I said, 'No, this is not my purchase.'"

Meanwhile, 94-year-old Carmen Sandoval was doubly glad she was in the room to hear the presentation.

"Oh, yes," Sandoval said. "It makes me more aware instead of just not paying attention."

On just why seniors seem to be the targets of more scams than the average population, she had a theory: "We feel good about people calling us. We feel happy that they are calling. We are ready to talk."

And now, after attending the Savvy Seniors seminar, what will she do the next time she receives a call from a number she doesn't recognize?

But on Wednesday, Sandoval was more than ready to talk, especially after her raffle ticket number was called, earning her a $50 Rite-Aid gift card courtesy of AAG. "It's nice because I go there all the time," Sandoval said. AAG awarded a total of four $50 gift cards.

With every new presentation, whether she is addressing a senior center group or a trailer park filled with seniors, 55 and over, Earle feels that she and the BBB are making a difference in the fight against senior scams.

"It allows us to create awareness in the community, and also to remind consumers of scammers," Earle said after her presentation. "Then seniors share that information with their family and other community members, so we're definitely making a dent."

Armed with their new anti-scam knowledge, the seniors in the room had but one last item to tackle on their busy agenda ? a hearty, nutritious meal on what had proved to be both a very stimulating and informative Wednesday morning. 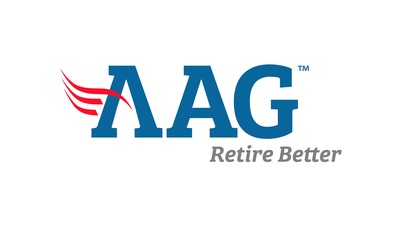