TORONTO, June 17, 2019 /CNW/ - The Stop Marketing to Kids Coalition is calling attention to a communication to Senators in The Hill Times urging the Senate to pass Bill S-228 before the end of the current parliamentary session. Known as the Child Health Protection Act, the bill would restrict the marketing of foods and beverages high in sugar, salt and saturated fat to children 12 and under. The communication, an urgent plea to senators, was placed by the Canadian Paediatric Society (which is an endorsing organization of the Coalition) and the Pediatric Chairs of Canada. 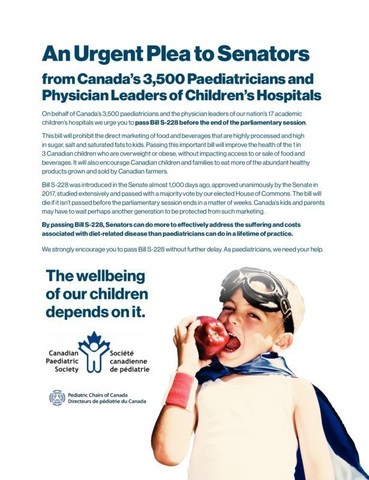 "We know that dietary habits are shaped during childhood, and that a poor quality diet is associated with a multitude of health conditions, including overweight and obesity, type 2 diabetes and cardiovascular disease. It's up to the Senate to do the right thing and help protect our children. Marketing to children is unethical, and it needs to stop," said Dr. Catherine Pound, Associate Professor of Pediatrics, University of Ottawa; Pediatric Consultant, Division of Pediatric Medicine, Children's Hospital of Eastern Ontario.

"By passing Bill S-228, the senators can do more for children's health than any pediatrician can do in a lifetime of practice. Blocking its passage is an outrageous obstruction of democracy at the expense of children's health," said Dr. Tom Warshawski, pediatrician and Chair of the Childhood Obesity Foundation. "It will be a travesty if this bill dies on the Order Paper."

Excessive consumption of sugar, salt and saturated fats is linked to high blood pressure, fatty liver disease, adverse blood fat profiles, glucose intolerance and unhealthy weights. According to the Canadian Paediatric Society, one in three children between the ages of five and 17 are affected by overweight or obesity, and conditions such as fatty liver disease, previously only seen in adults, are now affecting children as young as five years of age.

The government must take action to denormalize overconsumption and poor eating habits. Industry cannot be relied upon to self-regulate ? self-regulation has been a dismal failure. The industry continues to bombard children with 25 million food/beverage ads per year on the top 10 websites visited by kids. Over 90 per cent of food and beverage product ads viewed by kids online and on TV are for products high in sugar, salt and saturated fats.

No foods to be branded unhealthy
Health Canada has stated that no foods will be branded as unhealthy. Food and beverages will first be assessed to confirm they are being marketed to children. If they are, they will be assessed for their sugar, salt and saturated fat content. It the content is higher than the threshold, the products could still be sold ? just not marketed to children.

No impact on food industry
Restrictions on marketing to children have been in place in Quebec since 1980, and the food and beverage industry there remains strong and thriving. The positive health impacts have been significant. Quebec has the highest rate of fruit and vegetable consumption in Canada and children in Quebec from five to 17 years have the lowest rate of obesity in the country.