WASHINGTON, June 14, 2019 /PRNewswire/ -- Alexander Nazaryan, the national affairs correspondent for Yahoo, will discuss his new book, "The Best People: Trump's Cabinet and the Siege on Washington," as part of a discussion with Republican political strategist Rick Wilson at a National Press Club Headliners event at 6:30 pm on June 27. 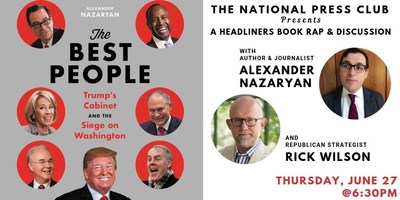 In "The Best People," Nazaryan looks at President Trump's cabinet over his first couple of years in office and the myriad of scandals, embarrassments and resignations that have arisen despite Trump's campaign pledge to "make America great again."

With meticulous reporting from the highest levels inside the administration, Nazaryan argues that Trump has failed his supporters in exacting an "assault on the administrative state," as promised by Steve Bannon, and has instead, with the help of his cabinet, unleashed an assault on the honor and prestige of the nation's highest office and "the gears that make government run."

The moderated discussion will include Rick Wilson, a Republican strategist who has worked for President George H.W. Bush, then Secretary of Defense Dick Cheney, and New York Mayor Rudolph Giuliani among others, and has been an outspoken critic of Trump since his 2016 candidacy.

Tickets cost $5 for members of the National Press Club and $10 for non-members. Please click here to purchase tickets.

When purchasing your tickets online, you will also have the option of buying a book. Books will be available for pick up and signing at the event. You may also purchase a copy of the book at the event. Proceeds from the book sales will benefit the National Press Club Journalism Institute, the non-profit affiliate of the Club, so the Institute asks that you leave all outside books at home.