Beyond prejudice, communicate differently: the Commission launches the call for nominations for the 2019 Rights and Freedoms Award

MONTRÉAL, June 3, 2019 /CNW Telbec/ - The Commission des droits de la personne et des droits de la jeunesse launches today the call for nominations for the 2019 Rights and Freedoms Award. The theme of this edition, "Beyond prejudice, communicating differently", reminds us that the media and more generally anyone who disseminates content and information are key actors in the promotion and defence of human rights: they influence public opinion and have a major role to play in raising awareness and education. 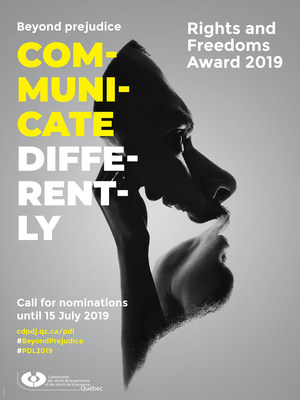 "We live in an era where the use of stigmatizing, discriminatory and hateful speech is too often trivialized. It is important to highlight alternatives that offer respectful and balanced points of view. There are several initiatives in Québec that attempt to combat generalizations and prejudices and we would like to highlight them," said Philippe-André Tessier, President of the Commission.

The Award will be awarded this year to an initiative that brings about a speech that invites a change of perspective by highlighting the human behind the labels. It can take many forms: an article, a TV show, a feature story, a documentary, an exhibition, a series of posters, a comic strip, a blog, a multimedia awareness campaign, etc.

The Commission is very pleased to have once again convened an exceptional jury to evaluate the applications: Manal Drissi, columnist and blogger, Normand Landry, professor at the University of TÉLUQ and holder of the Canada Research Chair in Media Education and Human Rights, Marjorie Villefranche, executive Director of the Maison d'Haïti and member of the Commission, Émily Laliberté, founder and artistic director of Coup d'éclats, winner of the 2018 Rights and Freedoms Award, and Philippe-André Tessier, president of the Commission.

People and organizations are invited to submit nominations by filling a form online on the following link: www.cdpdj.qc.ca/pdl. Completed nomination forms should be sent to the Commission by Monday, July 15, 2019 at 5 p.m.

Since 1988, the Rights and Freedoms Award is awarded each year on the International Human Rights Day which marks the adoption of the Universal Declaration of Human Rights. It aims at highlighting the exceptional achievement or commitment of an organization or an individual that contributed to the protection and promotion of human rights and youth rights in Québec.

The Commission des droits de la personne et des droits de la jeunesse (Human Rights and Youth Commission) ensures the promotion and respect of the principles set out in the Québec Charter of Human Rights and Freedoms. It also ensures that the interests of children are protected and that their rights recognized in the Youth Protection Act are respected and promoted. In addition, the Commission oversees compliance with the Act respecting Equal Access to Employment in Public Bodies.