Affordability in the Top 10 Most Popular Markets for Millennials, According to NAR

WASHINGTON, April 25, 2019 /PRNewswire/ -- A wide range of factors contribute to why millennials decide to move to certain areas, remain for an extended period or choose to relocate shortly after their arrival. Job market and affordability in the given location are two of the main reasons that impact millennials the most, according to the National Association of Realtors®' 2019 report, "Most Popular Areas for Millennials: where they move and stay." 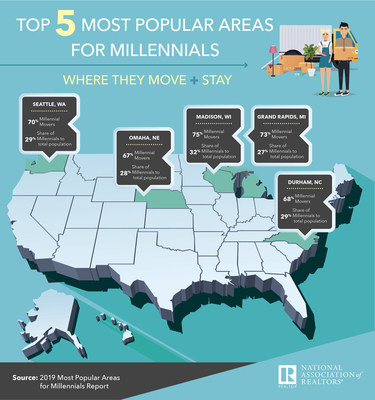 The report analyzed employment gains, population trends, income levels and housing conditions in the largest 100 metropolitan statistical areas1 across the country to identify the most popular areas for millennials.2  The top 10 metro areas were selected because of their high share of both present millennial residents and recent movers3, as well as their favorable employment opportunities.

NAR found that Madison, WI, is one of the top destinations for millennials. Seventy-five percent of recent movers to the city have been millennials. Additionally, this segment of the population has mostly elected to remain in the area.

Lawrence Yun, NAR's chief economist, says Madison has many attributes that appeal to millennials, including earning potential. As of 2017, the median income for millennials there was $62,000, and $68,500 for millennials who had recently moved to the city.

"In comparison to other areas, Madison offers one of the highest wages for millennials," says Yun. "Moreover, this income level combined with the robust employment opportunities and the affordability, make Madison among one of the most appealing locations for millennials who are looking to stay longer and raise families."

The report also found that California is a popular home buying destination for millennials, specifically Bakersfield, which is between San Francisco and Los Angeles. Bakersfield ? where 28% of millennials live and where 67% move to ? is attractive to millennials because it is one of the most affordable metro areas in the state.

Yun has called for more West Coast housing and construction. He says Bakersfield's affordable homes makes it inviting to millennials. Of the millennials who most recently moved there, they can afford to purchase nearly 15% of the homes listed for sale.4 This is in comparison to neighboring Los Angeles, Calif., where millennials can only afford to buy 4% of listed homes.

"The increasing employment rate in California is another strong selling point among this generation," says Yun. "While the rate of unemployment in Bakersfield is higher than it is nationwide, we're seeing job growth there pick up at a strong pace. Home building in Bakersfield is rising, too. Many newcomers to San Francisco and Los Angeles do not stay for long because of unaffordability. Millennials moving to Bakersfield meanwhile are looking to take advantage of conditions toward homeownership."

NAR research revealed that Oklahoma City, OK, is attractive to millennials looking to purchase a home or who are already in a home. Twenty-nine percent of the city's residents are millennials, while 61% of those who recently moved there are millennials. During the time of the survey, of the properties on the market in Oklahoma City, millennials were in position to afford 30% of those homes. The unemployment rate is less than 3%, and the city experienced the third highest increase in wages among the 100 largest metro areas.

"An overwhelming majority of younger and older millennial homebuyers responded that their strong desire to own a home was the primary reason that they purchased their home," says Yun. "As long as supply keeps up to meet demand, and prevents costs from rising too high and too rapidly, these identified metro areas are likely to see an uptick in purchases from millennial homebuyers ? including Oklahoma City.5"

One out of two people who moved in the 100 largest metro areas was a millennial (54%), and one of four residents was also a millennial (25%).

NAR analyzed recent migration and population trends, employment gains, income levels and housing conditions in the largest 100 metro areas across the country to identify the most popular areas for millennials to move and stay.

The National Association of Realtors® is America's largest trade association, representing more than 1.3 million members involved in all aspects of the residential and commercial real estate industries.

1Areas are generally metropolitan statistical areas as defined by the U.S. Office of Management and Budget. NAR adheres to the OMB definitions, although in some areas an exact match is not possible from the available data. A list of counties included in MSA definitions is available at:  http://www.census.gov/population/estimates/metro-city/List4.txt.

2Millennials in this study are those born between 1980 and 1998. Moreover, the current study defines millennial recent movers as millennials who moved from a different state within the last year.

Information about NAR is available at www.nar.realtor. This and other news releases are posted in the newsroom in the "About NAR" tab.