Traffic congestion, collision frequency and increased repair costs have a significant impact on the premiums drivers pay in the GTA.

TORONTO, Feb. 26, 2019 /CNW/ - From Hamilton to Brampton, Vaughan to Whitby, drivers in the Greater Toronto Area (GTA) pay more for auto insurance than drivers elsewhere in the province.

According to Kanetix.ca's InsuraMap, the average Ontario auto insurance premium is estimated to be $1,473, yet premiums in the five most expensive cities (which are also some of the provinces largest) exceed this average by $500 to $1,000.

The most expensive cities for auto insurance in Ontario are:

By the numbers in Ontario:

"Auto insurance rates in the GTA continue to be the highest in the province," says Janine White, VP of marketplaces and strategy at Kanetix.ca. "Traffic density, congestion, collision frequency, and increased repair costs due to vehicle complexity have a significant impact on the premiums drivers pay in the region. In the first 9 months of 2018 in Ontario, for example, insurers paid out $1.30 in repair and expenses for every dollar of physical damage insurance premium collected."

As Canada's largest city, the average Toronto auto insurance premium comes in at $1,948 per year. However, residents who live in the northern areas of the city, whether it's the east end or west end, likely pay more even more for coverage. Estimated premiums in these parts of the city range from $2,250 to $2,590.

The most expensive areas in Toronto for car insurance are found within the following postal codes:

To view a map that shows where estimated premiums in Toronto run $2,250 or more, and, to see where the lowest Toronto auto insurance rates are found, click here.

By the numbers in Toronto

Traditionally, one of the factors that goes into determining your insurance premium in Ontario is where you live. However, this could change in future with Bill 42. This legislation, if passed, could make it so your postal code is no longer a factor in what you pay for coverage. In the meantime, drivers are encouraged to shop around for the best price.

"No matter where you live, auto insurance rates can vary considerably from one area to the next," continues Ms. White. "The only way to know for certain that you're getting the best price possible for your coverage is to shop around. It is the most effective way to ensure you're not missing out on savings with another insurance provider."

InsuraMap is an interactive online map which lets drivers see how car insurance rates compare to other parts of their city or province. It is available to drivers in Ontario, Alberta, Quebec, New Brunswick, Nova Scotia, and Prince Edward Island.

All estimated premiums are based on a 35-year-old driver of a 2015 Honda with a clean driving record.

Kanetix.ca? publishes rates from 50+ insurance providers, more than any other comparison platform in?Canada?so that users can find the best insurance rates for them. Use our site to find the best rates on Auto, Home, Tenant, Travel and Commercial Insurance. 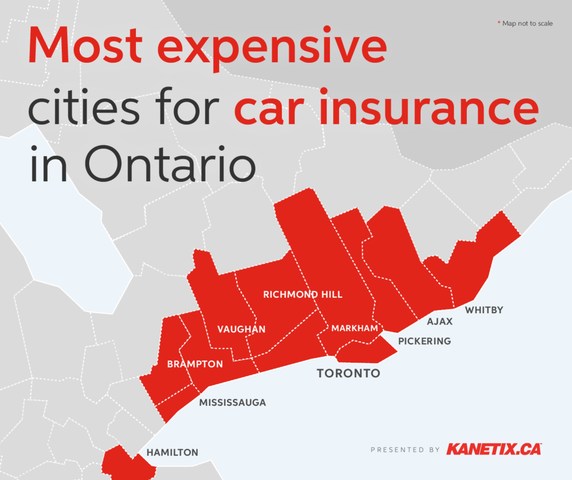