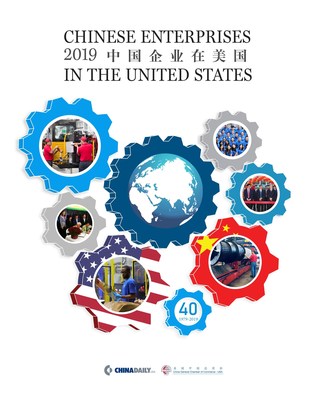 As in previous years, the book's focus is on leading Chinese companies that have invested in the US across a wide range of industries. Exclusive interviews with top executives at these companies by China Daily reporters based in the US showcase their investment strategies in the US, the challenges they face and the progress they have made.

"With rich stories of Chinese investment in the US, the book will again tell our readers in the US and China that the two countries' economies are interdependent and both stand to benefit from that continuing trend, despite the challenges that may lie ahead," says Zhou Shuchun, publisher and editor-in-chief of China Daily, in the preface.

This year's book was jointly launched by China Daily USA and China General Chamber of Commerce ? USA (CGCC), the main organization representing Chinese companies in the US, at CGCC's annual gala in New York on Jan 7, which attracted more than 500 guests, including government officials and business leaders from China and the US.

For the first time in its seven years of publication, the book details the significant efforts and successes by US states in attracting Chinese investment.

"Chinese companies are emerging as economic powerhouses in a wide range of markets and, as we prove Kentucky to be a ready and willing business partner, that will mean even more jobs and foreign direct investment flowing into our state," said Kentucky Governor Matt Bevin, whose first visit to China was last November to attend the inaugural Chinese International Import Expo in Shanghai, visit the key Chinese investors' headquarters and meet potential investors in China.

In his preface to the book, Bevin notes that Kentucky has eight Chinese-owned companies that employ more than 8,700 people.

Zhu Hong, minister of the Chinese embassy in Washington, shares his observation during his travels to many states in a preface:

"I have witnessed the overwhelming support state and local governments have given to Chinese companies and the benefits and deep connections Chinese investments have generated for businesses and people on both sides."

Chinese investment started to emerge in the US in 2007 and 2008. It continued to increase in the next 10 years or so, reaching a peak in 2016 with investment valued at $46 billion, according to Rhodium Group, a New York-based research firm that closely follows Chinese foreign direct investment (FDI).

But due to the US government's increased scrutiny and tightened regulations on Chinese FDI and the Chinese government's adjustment of its outbound investment policy, Chinese investment in the US declined dramatically in 2017 and 2018 with new investment falling by nearly 90 percent, according to Rhodium.

"The series has become an irreplaceable resource for anyone seeking to understand the widening economic interdependence between China and the United States," said Chas W. Freeman, Jr, former minister of the US embassy in Beijing, who served as principle American interpreter for US President Richard Nixon during his 1972 ice-breaking trip to China. Freeman later became US ambassador to Saudi Arabia during the administration of President George H.W. Bush and assistant secretary of defense during the Clinton administration.

China Daily USA will launch the e-book version of the 2019 edition on Kindle and Apple Books in early April.