Economic Growth in Asia-Pacific Will Slow as Part of Global Growth Cooldown, According to Bank of the West Chief Economist at 24th Annual Pacific Rim Client Appreciation Dinner

LOS ANGELES, Dec. 13, 2018 /PRNewswire/ -- Economic growth across the Asia-Pacific region will continue in 2019, but is expected to slow amid a global economic downturn Bank of the West Chief Economist Scott Anderson said at the 24th Annual Pacific Rim Client Appreciation Dinner. Emphasizing its decades-long commitment to the Pacific Rim market, Bank of the West held its annual Pacific Rim Client Appreciation dinner last night in San Gabriel, CA for more than 400 Pacific Rim clients. Attendees ? many of whom are Asian immigrant and Asian-American entrepreneurs ? heard from Bank of the West executives about the Bank's commitment to making a positive impact on the communities it serves. 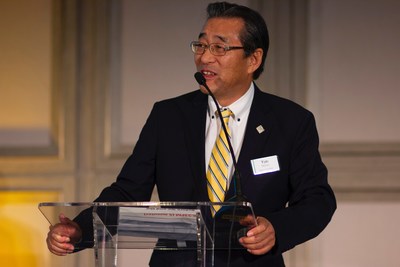 "Global growth is slowing and we are in the late stages of a cyclical expansion," said Anderson. "Asia, particularly the most developed countries in the region, will continue to grow faster compared to other regions across the world, but we are seeing signs that the period of strongest growth is over."

In the United States, Anderson expects the U.S. Federal Reserve will raise interest rates twice throughout 2019, but pause further rate increases as the domestic economy cools. With U.S. job growth slowing, Anderson estimates the U.S. unemployment rate will rise by the end of 2019 after reaching record lows earlier in the year. He also projects domestic Chinese GDP growth in 2019 will lag that of other developing Asian countries. For more of Anderson's economic analysis, follow him on LinkedIn or at the Bank of the West Blog for weekly updates.

Anderson along with Yukinori Nishio, EVP and Head of the Bank's Pacific Rim Banking Division, Michelle Di Gangi, EVP and Head of Small and Medium Enterprise Banking, and Ryan Bailey, EVP and Head of the Retail Banking Group, also participated in a press event prior to the annual dinner. Nishio, at both the dinner and press briefing, provided an overview of Bank of the West's Pacific Rim business over the last year, including its commitment to customers through representative offices in Tokyo and Taipei, respectively.

"Bank of the West wants to positively support our communities and our customers, whether their needs are local or global in nature," said Nishio. "We are honored our customers see Bank of the West as the bank that is best positioned to help meet the challenges they face in an evolving world."

About Bank of the West
The fundamental belief that a bank should have a positive impact on society drives Bank of the West. At a time when people demand more from companies, we are taking action to ensure our activities help protect the planet, improve people's lives, and strengthen communities. That's why we are investing where we can have a real impact: supporting energy transition, helping enable female entrepreneurs and financing innovative start-ups. As the bank for a changing world, Bank of the West is committed to sustainable finance along with our parent company BNP Paribas, which is one of the only financial organizations in the world to adopt the UN Sustainable Development Goals. Through Digital Channels and offices across the U.S., Bank of the West provides financial tools and resources to more than 2 million individuals, families and businesses.

SOURCE Bank of the West