WASHINGTON, Dec. 13, 2018 /PRNewswire/ -- Korea experts examined current events and opportunities presented for unification of the Korean peninsula based on a shared history and heritage at a packed forum at the Carnegie Institution for Science in Washington on December 12. 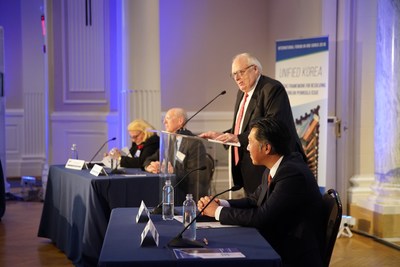 Organized by the Global Peace Foundation and Alliance for Korea United, the forum, "Unified Korea: Strategic Framework for Resolving the Korean Peninsula Issue," noted growing popular and political support for the unification process in South Korea, while also cautioning that unification is fraught with challenges that require both broad civil society engagement and international political resolve.

Global Peace Foundation Founder and Chairman Hyun Jin Preston Moon called on U.S. policymakers to embrace the idea of unification as a necessary strategic approach to denuclearizing the peninsula. Recalling the leadership of U.S. President George H.W. Bush and the process of German reunification, Moon said there were important lessons for Korea.

"One is the importance of a strategic policy that has a clear end goal in mind ? unification ? and works towards it steadily and systematically.  Another is to recognize and wisely support the popular movements that are dynamic and vital ingredients for transformation." The goal of a unified Korea "separate from the legacy of the Cold War and based upon Korea's shared cultural history," he said, is not the work of governments alone but requires a broad civil society coalition.

Alicia Campi, President of the Asian Politics and History Association, said that small states who have modernized or made economic reforms can play an important role as intermediaries between the Koreas. She described a "prism of cooperation" in areas such as disaster prevention, environmental management, transportation and energy which would "by definition lead to strengthening Korean peninsula unification momentum."

John Everard, former British Ambassador to the Democratic People's Republic of Korea, warned that North Koreans have vastly different perspectives than the South or of most international observers, and that unification presents formidable challenges, including extreme cost, difficult integration of North Koreans with little experience of personal choices or responsibility, and enormous economic disparities.

Heritage Foundation Founder Edwin Feulner credited the Trump administration with achieving progress through direct talks with the North, while saying that ties between the U.S. and South Korea were "as robust today as at any time." Feulner stressed that the only path to peace was uncompromising commitment to denuclearization, while affirming the "vibrant power of civil society" to bring change and to further a peaceful unification process predicated on freedom.

The organizers announced the One Korea Global Campaign would commemorate the historic March 1, 1919 movement for Korean independence in Seoul from February 26-March 1, 2019. The program includes a Global Peace Summit, a conference of international scholars and policymakers, a documentary film, art and poetry competitions, and a culminating Centennial celebration and One K Concert in central Seoul.