First-Time Homebuyers Savings Account Program Could Have Economic Impact Up To $68.8 Million In Pennsylvania

HARRISBURG, Pa., May 1, 2018 /PRNewswire-USNewswire/ -- Michelle Fournier just bought her first home in Lewisberry, York County. She laments having little to show for years of paying rent. 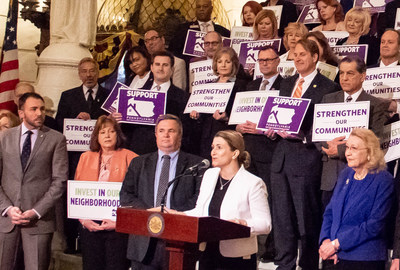 "I didn't even get to take the tulips that I planted," she quipped. "Nothing was mine."

But the costs associated with attending school made it difficult for her to save money for a home. Fournier spoke this morning in the Capitol rotunda at a rally in support of the First-Time Homebuyers Savings Account Program, which would provide an incentive for homebuyers to save for down payments and closing costs.

H.B. 1981, as it is formally known, would allow first-time homebuyers or buyers re-entering the housing market to set up 10-year tax-deductible savings accounts for purchasing a home. Similar legislation, Senate Bill 1066, was introduced by Sen. Bob Mensch (R-Montgomery) and Sen. Wayne Fontana (D-Allegheny) and is pending in the Pennsylvania Senate.

The program would help consumers overcome hurdles to homeownership, such as low salaries and college debt that can make it difficult to save for a down payment. Since the 2009 financial crisis, the share of first-time buyers in the national home sale market has fallen from 45 percent to 32 percent.

In a survey, more than 80 percent of Pennsylvanians said the First-Time Homebuyers Savings Account program would be beneficial to the state.

"I believe it's because homeownership is the embodiment of the American dream," Bizzarro said.

The program could boost home purchases in Pennsylvania by as many as 4,000 per year. A report commissioned by the National Association of Realtors® found that the program's economic impact could reach $68.8 million.

"This would have an overall positive effect on Pennsylvania's economy, because research shows that the total economic impact of the sale of a typical home in Pennsylvania is more than $52,000," Brown said. "This will help to spur additional economic activity, job creation and higher earnings for households, all while helping Pennsylvanians achieve the American dream of homeownership."

Todd Umbenhauer, president of the Pennsylvania Association of Realtors®, said that as a Realtor® for more than 40 years, "I've seen many first-time homebuyers struggle to come up with the money to cover down payments and closing costs.

"In fact, my daughter and her husband recently bought their first home, and I know they would have been thrilled to save a little more to use toward their purchase. They are not alone, which is why we're all so excited about the First-Time Homebuyers Savings Account program."

The Pennsylvania Association of Realtors® is a trade/professional association that serves more than 33,000 members in the commonwealth of Pennsylvania.