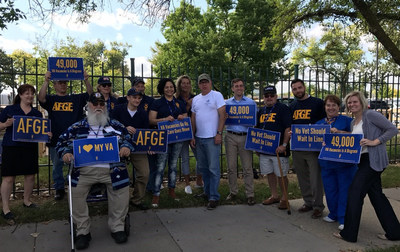 "Dan Feehan is an Iraq War veteran who has stood shoulder to shoulder with fellow veterans, VA workers, and AFGE members in calling on this administration to fill the 49,000 vacant positions in the Department of Veterans Affairs," said American Federation of Government Employees District 8 National Vice President Gregg James.

"When it comes to serving his country, Dan Feehan doesn't just talk the talk, he walks the walk. After serving two combat tours in Iraq, he continued his public service as an elementary and middle school teacher and later as the assistant secretary of Defense for military readiness in the Obama administration," James said.

"Dan Feehan will fight in Congress to support federal workers and the programs and services we deliver to the public every day."

More than 32,000 federal employees live in Minnesota ? caring for veterans, supporting the military, keeping dangerous criminals safely behind bars, and ensuring our food is safe to eat. There are more than 5,500 active and retired federal employees in the 1st Congressional District.

AFGE is the largest federal employee union in the country, representing 700,000 federal and D.C. government workers in all functions of government. District 8 has more than 11,000 dues-paying members in Iowa, Minnesota, Nebraska, North Dakota, and South Dakota.

The American Federation of Government Employees (AFGE) is the largest federal employee union, representing 700,000 workers in the federal government and the government of the District of Columbia.